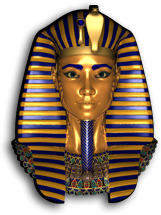 The sands of Egypt have covered a secret for three and a half thousand years.

Twelve years ago, Alex Tregaron uncovered the statue of King Hatsuret I, the only proof of his existence on the face of the earth. Last night, her cousin discovered the unknown pharaoh’s tomb. Now he’s missing. Some one out there believes she knows where they are. Can she find her cousin and the tomb before it is too late?

Some secrets are meant to stay hidden.